Any person’s reaction to the sudden loss of a loved one, most especially a spouse is probably as different as their DNA. The movie “Demolition” is about the subject of grief and sudden loss of a spouse. The different way this depressing subject is examined is how the husband, played very well by Jake Gyllenhaal handles the shock and grief in extremely unusual ways which include trashing his house, volunteering to demolish other houses, taking machines apart and organizing and examining each individual part. This movie starts with a car accident which is tastefully shown as Gyllenhaal’s wife is driving the car where he is the passenger and his reaction to her being hit on the drivers side by another car and then a flash of deployed air bags. I was relieved that the car accident scene was done without too much graphic display because that is the last thing any driver needs to see. We are all as drivers in this country at the mercy of the bad decisions, alcoholism or the texting of others whom we share the roads with.

From the beginning this movie is highly unusual and certainly not a big budget or widely released summer movie. After the accident Gyllenhaal has a problem with the hospital’s emergency room vending machine where he loses $1.25 but rather than just attempting to get a refund he sends a long letter to the company that manufactured the vending machine and included the entire story about his wife’s car accident, her death and even the details about his life after she died. What follows is a semi-relationship with a woman in the customer service department of the vending machine company played very well by Naomi Watts followed by a friendship with Gyllenhaal and her sexually confused son. Of course any movie like this would not be interesting if the entire story were just about a man going insane from grief and performing strange acts and there has to be several additional side stories to keep the audience interested. The challenge of this movie was; is an unusual story like this compelling enough to keep audience interest throughout the entire two hours? There were parts of these two hours that were slow at times, but for the most part this story did keep my interest the entire time.

I do recommend this movie. 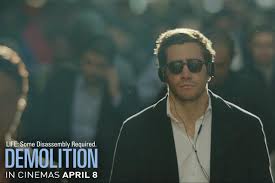