I always think about what are the main reasons to go see a movie and what makes a movie great? One of the main reasons to go to a theater and watch a movie for two hours is to escape reality and think about other things. Another reason could be to compare your life to other people and perhaps imagine how you would react or deal with a certain challenging or even funny situation. Another reason could be to learn something new about a historical event that you never knew or learn about some true story that you never knew about before. After that, when you pay money to see a movie you expect some effort in terms of writing the screenplay and the production quality and this certainly is something that is never guaranteed when you pay to see a movie.

In July 1998 after several months of previews, there was a huge amount of buzz about the release of a new Steven Speilberg film entitled “Saving Private Ryan” , which was not only about the June 6, 1944 Normandy Invasion but also loosely about the true story of The Niland Brothers, and how the United States Army was trying to save what they thought was the only surviving brother in World War 2. The previews of Saving Private Ryan were initially showing Tom Hanks on a boat about to invade the coast of France in the beginning of the Normandy invasion and all the talk on the internet was about the realism that this movie would show about the horror of war. This is where “Saving Private Ryan” set itself apart from all other movies that have ever been made. For the first time, there was a war movie that showed what it was really like for thousands of young men during World War 2, most of them not even 20 years old who were killed and wounded during the largest invasion in human history. Even more remarkable about this groundbreaking film, the best Speilberg ever produced, was the fact that soon after the movie came out in July 1998, the veterans of the Normandy Invasion came out and spoke of the realism of this film and most especially what happened during the Normandy invasion.

While watching Saving Private Ryan for the first time in July 1998 and again in September 1998, I remember having thoughts of what it must be like for so many of these young men who thought they were invincible but in an instant their war experience was over in 20 seconds as soon as the door dropped down from the boat they were in and they were killed by massive incoming German machine gun fire, or they drowned because of their heavy equipment on the ocean floor or while trying to find cover, they were killed on the beach trying to get out of the Normandy coast onto land. For those few who made it to the cover to some of the cliffs of Normandy, they had to witness the horrible deaths of so many other men their age who were struggling to survive the first few moments of the invasion . Witnessing a horrible death in front of you as you follow had to be one of the worst experiences of these heroes whose actions that day, saved the world. The thoughts of terror of watching many other horrible deaths and knowing that you are next for me had to be one of the most extraordinarily difficult experiences these young men had to live through. This movie reminds​ all of us, better than any other War movie ever has, that in this life there is War and then everything else. Compared to the horrors of war, everything else is bullshit and pales in comparison.

After Saving Private Ryan came out many people came out and protested the extreme violence and death depicted in this movie, forgetting that showing this level of violence and war realism for the first time was the whole point of the film. By showing what really happened during a horrible war demonstrated a level of appropriate respect to those who survived and those who died not only during the Normandy Invasion but in all wars. I remember hoping that if more movies like this were made and enough people saw them that just maybe humanity would have fewer wars or think twice before sending so many young people to their early death.

Sadly due to the insanity of the Oscars, Saving Private Ryan did not win the best picture for 1998; instead, the movie Shakespeare in Love won, for reasons unknown. Speilberg did win for best director but Tom Hanks did not win for best actor which was a major mistake, mostly likely due to the fact that he had already won 2 best actor Oscars which should have no bearing on who wins an Oscar each year.

Like all greatest of all time movies, you remember little scenes along with the big ones. For me the scene where Tom Hanks is getting his orders from his commander and looking at the high octane Army coffee and sandwiches being made at a nearby table, the view of the Normandy Bay where he looks at and notices the ships and thousands of soldiers in the biggest invasion in human history stand out as memorable. Finally Tom Hank’s “earn it” at the end of this great film is one of the greatest lines ever spoken by any actor in any movie.

The odds are low after all these years that many people have not seen Saving Private Ryan, but if you haven’t you owe it yourself to see one of the greatest movies that will ever be produced. 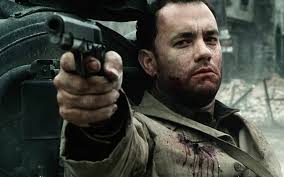