The events of this film are fiction, based on the book “The Good Shepherd” by C.S. Forester. The screenplay for this movie was written by both Tom Hanks and C.S Forester. During World War 2, in the battle of the Atlantic, “3500 ships were lost carrying millions of tons of cargo were sunk and 72,200 souls were lost”.

From the start, the commander of a battle ship, Captain Earnest Krause, played by Hanks is in charge of the protection a crowd of freighter ships in the North Atlantic in 1942 from German U-boats. What impressed me the most about the constant danger throughout the start-to-end battle within this story, was the complex maneuvering and the barking of orders from Captain Krause, where one small misstep could cost the lives of everybody on board of the battleship he commands. Krause’s ship is surrounded by submarines, and other German battleships involving excellent special effects within very choppy ocean water. There are at least 3 almost collisions with Krause’s battleship and other ships as Krause tries to avoid the constant attacks by the enemy.

Most unusual about this entire movie is that there is really no story, instead just a series of non stop events in the life of a battleship and its crew during a high point of the Naval battles in the North Atlantic in 1942.

The Rotten Tomatoes ratings are only about 76% and my rating is more in the 90% range, mostly because of the special effects and Tom Hanks performance. I highly recommend Greyhound as one of the best Naval War movies ever made. See the Greyhound WW2 movie trailer below. 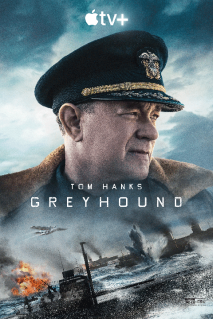