As far as the new movie on Netflix “Fatal Affair”, starring Nia Long and Omar Epps, the real story is how can this same exact movie, be made so many times. The entire story is always the same. A largely black cast, a love affair gone wrong, one of the partners, either a man or a woman is either mentally disturbed or insane. Then there are several incidents that prove that the person who was rejected is completely off the deep end, and then the climax includes several characters running for their lives, physical violence and the insane person, along with other people in harms way, die.

I agree with the very low ratings on Rotten Tomatoes of 16% and 4.4 on IMDB and I do not recommend this mostly bad film. 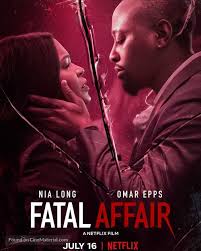