Rather than reviewing one of the latest Pay Per View movies that have been released – “Forces of Nature”, I thought a better idea would be to examine how movies this bad, with well known actors are even made in the first place. This alone would be a great idea for a documentary entitled “Why and How Bad Movies are Made”.

In the case of this very bad movie, why any actor – known or unknown – could read this script and then decide to risk their careers by agreeing to take the part is more interesting than listing the boring details of one day in the lives of 2 cops, Cardillo and Jess during a Hurricane in Puerto Rico.

The two cops are played by Emile Hirsch and Stephanie Cayo. Cayo is an unknown actress and Emile Hirsch is well known and not too long ago was making some very good movies. While it is understandable to want to stay current as an actor, but choosing a bad role in a very bad movie, cannot be a good idea, no matter how badly things are going for you in the movie industry. This is also true of Kate Bosworth, who has not made many movies recently after being prolific about 10 years ago. Taking this role will do nothing to revive anyone’s acting career.

As for Mel Gibson, despite doing everything in his power to say and do the wrong thing for the last decade he is still a great movie director and is also very rich, so why did he decide to be in a movie this bad? Mel Gibson’s appearance in this bad movie is the most confusing part of this waste of 2 hours. This is one of those cases where I think there was some Hollywood favor that was owed. Despite being the main draw for this movie, Gibson’s appearance seems very awkward and out of place.

As far as the plot of Forces of Nature, the most interesting part of this entire story was one of the tenants in this run down Motel who has a violent pet Alligator who he feeds hamburger from a local food store. The criminals in the Motel trying steal valuable paintings in the building was completely unwatchable.

Forces of Nature has a 4.4 rating on IMDB and a 9 on Rotten Tomatoes and for a change, both of those numbers are accurate. Nobody should waste their time or money on this remarkably bad movie.

This excerpt from a review of Forces of Nature by Paul Byrnes summarizes one reason how and why bad movies are made:

“Some movies are born bad; some achieve badness through lack of care or budget. Some seem to aspire to it and director Michael Polish has had a long enough career to know the difference.” 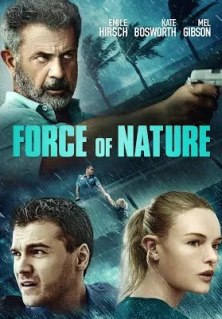