The movie “Maggies Plan” is a rare low budget movie with quite a few high-level actors in Hollywood. I often wonder how deals like this come about, perhaps friends get together and make deals for future collaboration, etc. This movie is entirely about relationships and because so many movies about relationships have been made, this one has a new twist: namely; a marriage breaks up because of another relationship but the woman in that marriage realizes that the man is better off with his x-wife so she arranges things so that he will get back with his x-wife. I have to admit I have never seen an idea like this before and this movie seemed like a Woody Allen-type romance movie although not as high quality. Several pretty important actors are in this film, starting with Julianne Moore, who had a rather strange Russian accent in this movie, Ethan Hawke, Bill Hader, Maya Rudolf and Gretta Gerwig who plays Maggie and considering the art house low budget of this film is highly unusual in my experience.

As far as the movie it was entertaining but not extremely so, mainly because it was too long and the story and scenes were never compelling enough to keep your riveted or laughing or entertained enough for the whole film. This movie just gets a mild recommendation. 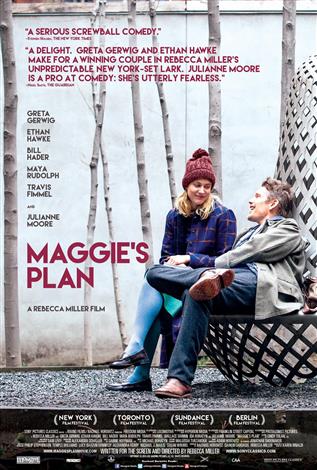