Kevin Hart has probably made the most movies of any well-known movie actor in the last 5 years and I heard the other day that his movies have grossed close to 1 billion dollars. I have noticed that all of his movies follow the same pattern. An average story, some physical humor and many attempts at verbal humor, some that fails and some that are only moderately funny. As a standup comedian Kevin Hart is one of the best to come out in many years, but as a comedic actor, he has to find better scripts than the mostly average ones he has found so far. The other problem if this keeps up is overexposure which can be the death of anyone’s acting career in Hollywood.

The other hard working actor in the movie “Central Intelligence” is Dwayne Johnson, “The Rock” and over the last 5 years, he has probably chosen his movie roles a little better than Kevin Hart. The good part of this movie includes some important statements about bullying, which is a huge problem in this country and has been getting worse over the years. From an outrageous bullying incident in 1996 involving Johnson’s character who was obese at the time, he later became not only a great physical specimen “because of his 6 hours of training for 20 years”, but also a CIA agent. The re-connection of Hart’s character and the Rock is through Facebook and very quickly they find themselves being chased around by CIA agents within a story that became rather convoluted and run of the mill. Some of the physical comedy was somewhat funny but not enough as were some of the lines and interaction between Hart and Johnson’s characters.

This movie is a very typical Kevin Hart movie and if you are not a big fan, you can miss this film. 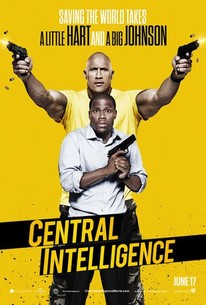