The first line of this movie was a graphic that stated: 12,000 miners a year die working in mines. One has to wonder with all the amazing and modern technology in this world why we still have human beings risking their lives like this and the fact that being a miner and working so far underground has to be just about the worst job in the world. Even if you are not killed by a rock slide or a cave in, the odds are high that you will eventually die horribly of black lung disease. As we all realize so often, what we all have to go through to make a living can be the very nightmare of a human beings very existence.

This movie is about the historic events of 33 miners who almost died in a cave in in 2010 and after 69 days they were rescued. The acting was very good, but the movie at times did drag on because the story really had to do with the cave in, the problems drilling and rescuing the men and then the final rescue which took an incredible 69 days. For me the best part of this movie was when one of the officials involved in the rescue recommended that they miss the location on purpose; the thinking being that with all the rocks and the missed previous attempts that perhaps by missing on purpose, they just may find the men. This idea worked and for the most part so did this movie. 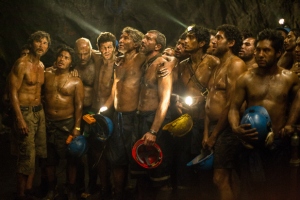