Most if not all of us who lived through the 2008 financial crisis would rather forget about what happened, instead of reliving how bad it all was and our fear that the end of the financial world had arrived. This movie not only reminds you how bad it was, but educates you to the fact that it was far worse than we all knew at the time. Everything about this movie; the acting, the story telling and the teaching of all the complex concepts in this financial crisis by using the actor talking to the audience or several cameo appearances that included Selena Gomez and Margo Robbie are all extremely well done throughout. In my opinion, this movie will definitely be nominated for a best picture Oscar. This movie is based on the book “The Big Short” , by Michael Lewis.

The concept of Deregulation of financial institutions which allows companies on Wall Street to do whatever they want to make profits with no government regulation is essentially what caused a financial disaster in the housing market and the associated “Las Vegas” like gambling that went on where bets were placed on CDOs (Collateralized Debt Obligations) which are essentially baskets of both good and very bad mortgage loans but also on what are called “synthetic CDO’s” which are peripheral bets on the original loans, which created outlandish and extremely high levels of risk. This combination of insanity is what resulted in a financial crisis that almost brought down the economy of the entire world. It was all allowed to go on because the government officials who were suppose to monitor what was going on and rank mortgage securities accurately just looked the other way.

Many things about the 2008 housing bubble, which really started in 2007 are infuriating, but what is most outrageous about all the debt, panic and misery this causes is that it was even allowed to happen in the first place. From the beginning of this tenure as the Fed Chairman, Alan Greenspan was calling for financial deregulation and when he finally got what he wanted, based on the decision of a very weak president in 2002; the ability of financial institutions to run free and do whatever they wanted became possible. The people involved did not care that their obscene greed would cause a generation of pain for millions of Americans in their 20’s and early 30’s and so many people who lost jobs and homes. All these criminals cared about was getting even more rich as easily as possible and worse than this was when all the smoke had finally cleared, nobody went to jail except for one wall street employee; although his sentence was not disclosed at the end of the movie. What was disclosed when this movie ended was that 8 million people lost their jobs, 6 million people lost their homes and 5 trillion in wealth was wiped out in a about 2 years. For me the fact that was mentioned in this movie that stood out the most was that for every 1 percent of unemployment in the Unites States, as many as 40,000 can die due to the stress, homelessness and misery of not being able to make a living in this country .

March 2009 is now known as the “generational low” in the stock market and after that incredible low of 6400 on the Dow and about 1100 on the Nasdaq, things slowly started to normalize and now the market seems to be back to where it should have been anyway, even if the financial crisis never happened. But in the back of everybody’s mind is the fact that something like this could happen again or perhaps the bail out that occurred at the end of 2008 is just a temporary band aid that really did not fix the real underlying problem that was caused by the sick greed of a few already rich individuals who right now should be in jail. Then we all remember that because of this crisis and some bad decisions and a very bad war in IRAQ, this country is now close to 21 trillion dollars in debt. After Bill Clinton left office, we were only 5 trillion in debt. Yes, most of the bailouts were necessary, especially Obama’s decision to bail out the car companies, but its very tragic that because of some very stupid decisions by some very greedy people, this country may never be financially healthy again.

This movie is about the 2007-2008 Housing bubble and financial crises as told through the experiences of 3 groups of individuals who had the foresight and courage to realize that the mortgage bond securities that were being sold as high quality investments to institutions around the world were not only mostly garbage, but also fraudulent. Their plan was to short these mortgage bonds known as CDOs or (Collateralized Debt Obligations) but the ability to even short these bonds that were considered so safe and high quality was not even possible at the time, so the method to short them called CDS (Credit Default Swaps) had to be invented by the financial institutions to make shorting possible. These individuals were actually laughed at by the employees of the companies where they attempted to buy these CDO’s because they were so sure of the safety and integrity of the housing market. All of these investors were so sure that they were right about the impending housing disaster that they bet billions of dollars that the entire housing and mortgage industry in the United States would collapse. What they didn’t realize was that they would be so right about these bets that they would have a great deal of trouble collecting their money because so many of the institutions who sold these CDO’s would become bankrupt. The acting in this movie by the 4 main actors, Steve Carrel, Brad Pitt, Ryan Gossling and Christian Bale is outstanding throughout and I would guess that several of these actors might receive Academy Award nominations. This movie is a 100% must see and I give it my highest recommendation. 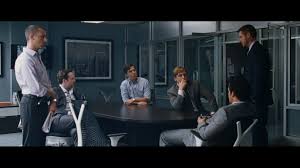 The Big Short on IMBD