While watching the movie “Popstar” I remember thinking that I have not seen many comedy movies that are essentially a documentary parody about anything, much less about Pop Stars or the music industry. Andy Sandberg was a long standing member of Saturday Night Live and is mostly famous for his videos which are mostly very well done. You could say that this movie is a long 2-hour video documentary that he used to do on Saturday Night Live. Interlaced with the difference scenes and videos in this movie are interviews with other celebrities who comment on the rise and fall of “Connor For Real” who is at first part of a boy band and then goes off on his own as a solo act. Of course, the music and lyrics are ridiculous on purpose which is part of what is suppose to be funny here but the question is: is this movie funny enough? Not according to the people in the audience I was in. There were some laughs here and there, but not too many and because of that, this movie fails as an effective parody.

If you are a big fan of Andy Sanberg and his videos on Saturday Night Live then this movie might be for you, otherwise, you would probably be better off skipping this one. 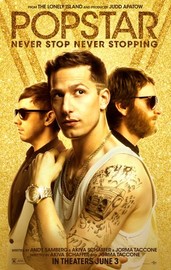