It’s shocking and very depressing to realize that in this country in the year 2015 that some 38,000 people were killed in traffic accidents. People lose their parents, their children, close friends and relatives every day in accidents that are in most cases completely avoidable. In many of these cases, people are able to somehow move on with their lives but what if your one of the many who can’t move on? What if you are not able to ever recover from the death of your wife or your husband or the loss of your parents? What then? What do you do? How do you cope with an unrecoverable loss that can ruin your entire life because of a random car accident?

The aftermath of a tragic car accident where a wife is killed, leaving her badly injured husband and young daughter is what this movie is mostly about. This is a very difficult story that is rarely a story line of any movies over the years and this film does it so well that it should be nominated for an academy award. This film also has the extreme contrasts of human traits and emotions: namely the strong bond and love between a father and daughter trying desperately to overcome the loss of her mother and his wife which increased their bond, along with the other extremes of selfishness and cruelty of his wife’s sister and husband who try to take his daughter away from him. The custody battle causes Crowe’s character extreme financial hardship and even more angst and stress after his wife’s death. Aside from Crowe’s overwhelming grief over his wife dying he also sustained some major medical problems after the car accident that killed his wife, including violent seizures which caused him to have to leave his daughter with his wife’s sister and husband so he could seek treatment for 7 months. One telling scene was a call from his lawyer requesting a 25,000 dollar retainer fee so Crowe could keep his own daughter from being taken away from him which was another injustice Crowes character had to endure. The cruelty and injustice of life are consistently and depressingly depicted in this movie throughout, reminding us all of life’s many pitfalls. What was worse is that fact that Crowe’s character is a struggling novelist who is running out of money due to bad recent book sales and is another additional reason why his relatives are trying to take his daughter away from him.

In my many years of seeing many movies, I cannot remember seeing an out of the mainstream, low budget movie release with this many A-list actors. “Fathers and Daughters” has 3 academy award winning actors: Russel Crowe, Jane Fonda and Octavia Spencer. Amanda Seyfried plays Russel Crowe’s daughter in one of her best ever performances. Aaron Paul does an outstanding job in playing Seyfried’s boyfriend and Diane Krueger is excellent playing the bereaved sister of Crowe’s wife and Bruce Greenwood as her husband. This movie has seven A list actors and was still not released as a mainstream movie which is something I have never seen before. Perhaps it was because they didn’t find room to release this movie because of all the summer blockbusters. This movie was also made in 2015 so maybe it didn’t test well enough to be considered for a December 2015 release. In my opinion, this movie is as good as any drama I have seen in quite some time and is worthy of an Academy Award nomination for the acting performances and a very well told story.

Russel Crowe has is as good as I have ever seen him as the lead actor in this film and his young daughter played so well by Kyle Rogers that some of the emotional father and daughter moments of grief were very hard to watch because the scenes between the two of them were so believable. Kyle also starred in the movie Miracles from Heaven which is also reviewed in this blog. Amanda Seyfried was outstanding as Crowe’s daughter in her adult years and the side story was that because of her grief she was unable to have any kind of a normal adult relationship because of her fear of losing another person she loved. She also was a psychologist specializing in helping children which was another outlet during her life for her extreme grief and love of her father.

This movie is outstanding and a must see for anyone who appreciates great acting and a great story. 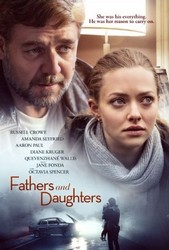