The movie Captain Fantastic asks the question of whether or not it’s possible to home-school and raise an entire family in the wilderness. At the end of this film, the answer to this question is both yes and no.  Like almost everything in life, no matter what you decide to do, there is an upside and very often an equal downside.  The children in this movie who range in age from 6 to about 18 are all extremely intelligent mainly because their parents brilliantly taught them just about everything. The older boy is so well educated he is able to get into just about all of the best Ivy League schools in the country, but the truth is that if all you know is just in books then you are missing something and you will have a very hard time fitting into the real world.

The idea to move into the woods with their family is because of the father played by Viggo Mortensen thought that he could help his wife with her bipolar mental disorder by getting her out of her law practice and into the wilderness. This seemed to work for a time but at the beginning of this film he finds out that she has committed suicide by slitting her wrists in the mental hospital she is in. Her husband and remaining six children are of course devastated but continue their Spartan life of constant education and exercise which even includes dangerous mountain climbing up the face of a mountain. This is one part of the wilderness life, along with learning how to fight with knives that could be considered child abuse.

When Mortensen’s wife dies he finds out from her father than he is not allowed to attend her funeral but like a true hippie and protester of everything that is considered normal and safe in the world, he decided to take his entire family to her funeral anyway, which causes great conflict between him and his wife’s mother and father. While at the funeral Mortensen’s tells the entire procession that his wife did not want to be buried, but instead she wanted to be cremated and flushed down a toilet! This revelation creates the ending part of the movie where the family intends to kidnap his dead wife’s body and grant her final wishes. After the funeral, his wife’s father played very well by Frank Langella tries to take the children from him, citing child abuse which is another conflict that creates the final act of this movie.

This film was filmed in the Pacific Northwest and some of the scenery that was shot is very impressive. The killing of a deer at the opening of this movie and some male frontal nudity from Mortensen are two rather disturbing scenes to sit through but overall, this movie is pretty average in terms of over the top scenes or dialogue. I do recommend this movie. 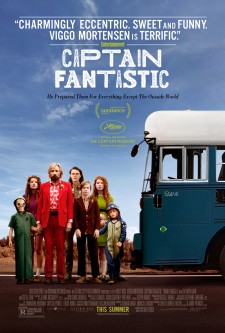