I have always wondered why certain movies get made, why they were selected from so many thousands. How they broke through the impossible hurdles that any screenwriter would find when he starts to write movies. I am always amazed at some of the bad movies that get made, given the impossible and unfair barriers in this industry starting with even getting an agent.

The movie “American Ultra” is another example of a bad movie that somehow got made. First of all the title American Ultra makes no sense and neither does this movie which is nothing more than a collection of disconnected action scenes and insane ideas that together create one bad mess of a movie. One thing you have to do nowadays to get a movie made is to make something very different, that has never been done before, but what this movie lacks is “weirdness wrapped in a good movie”. Its great to be different and weird but the quality has to be there too and there was no quality in this movie just lots of weird scenes.

I was surprised to see the lead actress Kristen Stewart in this movie proving just how fleeting and fickle top of the box office fame is. Why she would pick this movie to make probably says more about her potential prospects than her acting talent and that is a shame because she deserves to make a better movie than this one, especially after to recently being on top of the world with the “Twilight” movies.

Jessie Eisenberg is also miscast here as an unknowing secret agent/robot who has many action scenes but his physical presence does not support this role and he also deserves to be in a better movie than this one. You have to figure that there was a favor that was paid somewhere to someone to get two top young actors in a movie this bad especially considering that the writer of this screenplay and director are largely unknown.

The Making of a bad movie 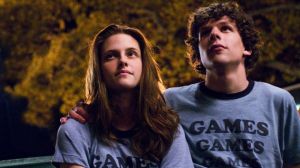