This movie is fictional. However something like what is depicted in this movie could definitely happen in some of the more dangerous countries in the world. What is not believable however is that under the conditions where an employee of a major American water company has to take a job anywhere in the world where there could be some danger, then he would never take his wife and 2 young girls with him and would only move there himself. This is where the movie fails as far as its the story being believable. Aside from this flaw this movie is quite hard to watch due to the extreme violence of gangs engaging in a coup due to the presence of an American Water company and what seems to be a misunderstanding as far as this companies intentions in their country.

During this entire movie, the main character (played by Owen Wilson, his wife and 2 young girls) are in constant danger and close to be being killed many times. During the uprising many people in the hotel where Wilson’s character and his family are staying, both Americans and citizens of the country are murdered and many of the scenes of violence are extreme and hard to watch, especially because the 2 young girls are in constant danger of imminent death.

Overall, I do recommend this movie but it is very hard to watch. The movie could be improved by perhaps trying to explain why the main character would take his family to live in such a dangerous part of the world, although considering the circumstances of this movie that would be very hard to explain anyway. 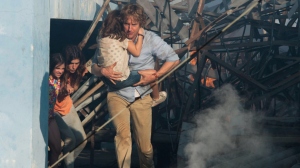